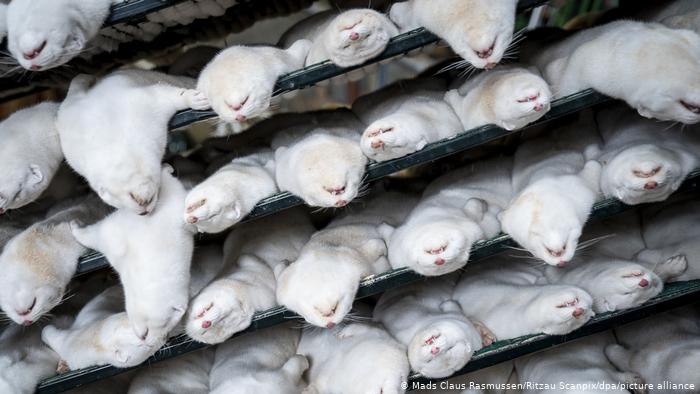 Denmark has a curious place in the popular imagination of North Americans (Hamlet, hygge, Havarti . . .). Yet how many of us knew before before November 2020 that Denmark has some of the largest mink farms in the world?

The rushed cull order for 17 million farmed mink, after they were found to be infected with a new strain of Sars-CoV-2, certainly added a new dimension to my admittedly shallow knowledge of Denmark (mostly based on some old TV shows I enjoyed).

Like any good episode of Borgen (2010-13), the cull order caused a political crisis. The Agriculture minister was forced to step down.

The prime minister empathetically engaged with her adversely affected constitutents.

And the right wing parties tried to use the scandal to their advantage.

But then there was twist more reminiscent of my other favourite show, Lars Von Trier's 1994-97 Riget (The Kingdom). Think of a Danish version of ER with a dash of Twin Peaks--the hospital is built over a haunted peat bog--and metatextual commentary at the end of every episode by the director, in the guise of a low budget Mephistopheles.

Riget's thematic throughline is a version of Freud's notion of the return of the repressed, which dictates that what we wish to bury shall always rise again.

As it happens, the hastily buried bodies of the culled mink not only pose a contamination threat to the surrounding soil and waterways (including a popular swimming lake), but also rose to the surface of their shallow mass graves once they filled with gases from decomposition.

In reality, the most nightmarish aspect of this whole incident is how the mutation emerged in the first place. The animals were originally infected with Covid-19 by farmworkers, and then the infected mink transmitted back to at least 214 humans a mutant form of the virus.

Zoonotic disease (when the agent of infection travels from animals to humans) and antigenic shift (different strains combine to form a new subtype of a virus) are the grain of truth at the heart of contemporary horror and medical thrillers, but they are also what happens when you crowd together huge volumes of sickly animals and have them tended to and processed by a disempowered and grotesquely exploited workforce.

The link between factory farming and the emergence of new pathogens is one of the terrifying realities of contemporary industrial animal farming of which we have for the most part remained blissfully unaware. In this regard, the Danish zombie mink of 2020 have done us a great favour in bringing some the consequences to light, like the potential for an animal host to incubate new mutant strains of the virus that is already killing millions of people in its original form.

Five other countries also reported coronavirus outbreaks at mink farms, but the strain causing the most concern seems to have died out.

The mink story may feel peripheral to your daily life. After all, in much of North America it has become socially unacceptable to wear real fur, as a form of cruel and frivolous animal exploitation. (Although it is worth noting that farms in several American states reported outbreaks).

But this threat is much bigger than just mink. Even at its largest scale, mink farming is a fraction of the size of industrial meat production. The latter remains unquestioned by the majority of the population. Most of us do not give a moment's thought to where the meat on the grocery store shelves comes from. This ignorance is a luxury we cannot afford. Future posts will delve into the origins of the poultry, pork, and beef that graces our plates.

Until then, a reminder that domestic animals are an underappreciated aspect of public health:

Human health is inseparable from the health of the planet and the other animals on it, as the authors of the article linked above observe:

Since the start of the COVID-19 pandemic, the world has learned much about virology, as well as the concept of One Health. At the core of One Health is the idea that human and animal health are intertwined in a shared environment, and that we need to broaden our perspectives beyond human health alone.

This story, like the mink themselves, seems to have an extended afterlife.

Meanwhile, Utah has achieved the full circle of transmission:

Perhaps now is a good time to observe the obvious--the largest concentration of mink farms in the world is in China, which thus far has remained quiet on this front.

Well, it looks like two French science writers (Yann Faure & Yves Sciama) have developed an interesting hypotheses with regard to the role of the massive Chinese mink industry in the origins of the current pandemic: are farmed mink the "missing link" between humans and bats in the evolution of SARS-CoV-2?

Published in the environmental news website Reporterre, this article is the lone source of these claims, which makes them suggestive but not authoritative. Reporterre seems be focused on the overall issue of the link between zoonotic disease and industrial animal farms, so I will spend some time summarizing the key points since the even English translation is not especially easy to read.

As the authors point out, China is both the leading market and producer of fur worldwide (raccon dog and fox are the other main species farmed alongside mink). With 3K+ mink farms, and some of these farms holding 100,000+ animals, the scale of the industry here dwarves what we saw in Denmark.

These farms are especially concentrated in Shandong province, which Faure and Sciama suggest is also home to many bat species, who may be attracted to cavernous mink farms as a roosting site. Farmed mink, they observe, are especially apt to provide a reservoir for the development of zoonotic disease:

In recent months, we have learnt from scientists that mink can catch the virus from humans and infect them back, often adding some mutations in the process. But beyond that, a long history of disease in mink shows that in overcrowded intensive farming, this solitary species — like all farmed carnivores, unlike social herbivores —is sensitive to many diseases and becomes a health nightmare.

Additionally, Faure and Sciama cite Covid-famous German virologist Christian Drosten's evocation of the link between raccoon dogs and 2003 SARS epidemic. In perhaps their most provocative hypothesis, they suggest that the lack of any investigation (until just recently) of mink as the potential missing link in the bat to human transmission chain might be an indication that the Chinese government sought to protect this key industry by diverting attention away from it.

It is surprising that officially not a single Chinese mink farm has been contaminated by Covid-19, whereas farms all over Europe—north, south, east and west —and in the United States and Canada have been affected. It would be abnormal for all the large producers in the world to be struck with the disease, except for the largest, despite many commercial links between industry professionals all over the world with the Chinese, especially North America, Northern Europe and Italy.