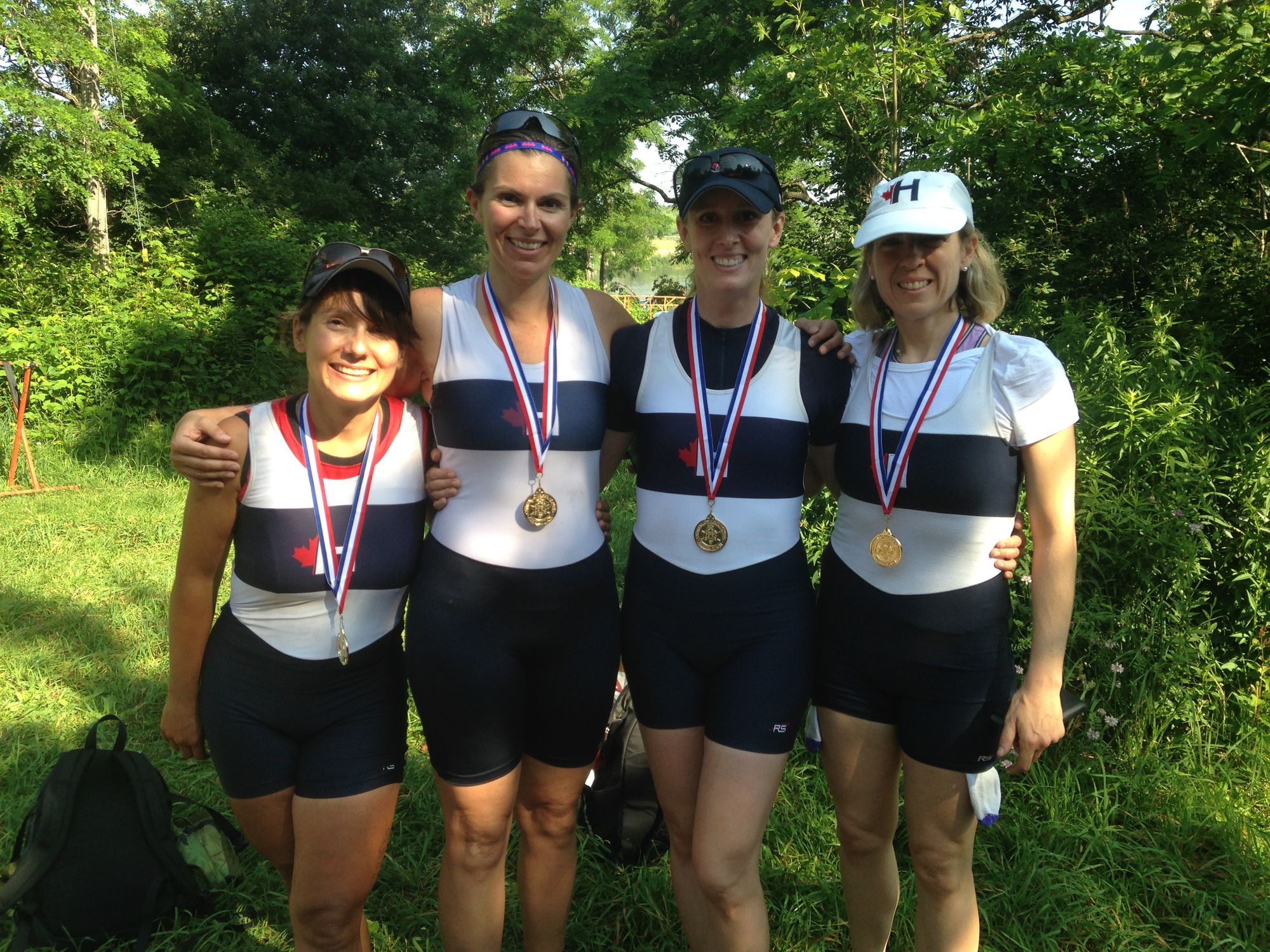 I miss the predictable order the rowing season used to bring to every summer. Seeing my rowing friends at dawn everyday for practice. And re-connecting with friends from other clubs that you only see at regattas.

June used to be all about the first race of the season for me. Named for Tony Biernacki Sr., the Brock University coach who initiated women’s university rowing in Canada back in 1967, this Masters-only regatta provides an early index of how your training is progressing that year.

For Ontario rowers, the gritted teeth suffering of late spring practices—cold, wet, windy—is but a memory by June. As the weather really warms up the water calms down, and you start to feel at home in the boat again after the long winter layoff. You’ve shaken most of the cobwebs off your on-water technique, but even if you were erging all winter, fitness levels aren’t yet at their race season peak.

I remember always tasting blood in my mouth as I gasped convulsively at the end of my first race of the year, struggling to recover. Masters race 1000m instead of the 2K distance standard for international competition. But shorter doesn’t necessarily mean easier. This distance is sprinted far more aggressively.

This year, Biernacki would have been this past Saturday. But it was cancelled long ago. More recently, so was Canadian Henley. The latter is the premier rowing event in Canada.

A weeklong regatta drawing crews from all over the world, Canadian Henley has been suspended only once before since it began in 1880: between 1916-19 for WWI and the flu pandemic.

Masters events have been part of Henley since the 1980s, and have become as highly competitive as the main regatta. At Henley, only the winner gets a medal. I still don’t have one. Yet.

Most rowing clubs are just now starting to let members back out onto the water, and often only in single sculls (1x), in accordance with physical distancing. It’s clear that this season will offer limited time on the water for most club rowers, let alone any racing.

Clearly my hiatus from competitive rowing is going to be even longer than I had planned. I could just row recreationally at this point. Many do. But I find that racing offers another set of rewards entirely, some personal and some interpersonal. It’s amazing how the absence of this opportunity has drawn into focus what I value about it.

Falling in love with rowing at 32 made for a difficult path in a sport that is largely hostile to adult beginners. I stuck with it because of Sara Hall’s 2001 book on becoming a successful competitive masters rower in her 40s.

After reading Drawn to the Rhythm, I was sold on the vision of myself hauling ass down the racecourse in a 1x well into my Grey Panther years. Getting to that point ended up taking a decade of struggling to acquire a level of technique adequate to moving fast in this tricksy, tipsy toothpick of a boat.

But there is nothing like the moment of naked honesty with yourself that occurs in the third quarter of a sprint race when you are all alone with your pain in the boat and still too far from the end to know that it’ll be over soon.

While pursuing those dreams of glory in the 1x, I learned about the very particular joy of racing in a crew. The double (2x) adds a layer of accountability to your partner—they know when you stop pushing hard—and the imperative to harmonize two individual stroke styles.

(The latter imperative is even greater when there are four bodies to synchronize. The payoff is that you whip down the course at speeds you can only dream of in a 1x. I was happy to discover that the long head races of the fall—typically about 5K in distance—feel like a pleasant jaunt in a quad (4x) compared to the long slog it is all by yourself.

I left behind rowing in a crew when I left Toronto. I was to join the nearest local club this season, but obviously that is now on hold. It’ll be another summer of car-topping my boat to solitary practices on local waterways. (Thankfully a year and a half of lifting of haybales and 50lb feed bags has made picking up my racing shell easier than ever).

After five solid seasons of racing all summer and into the fall, I’m at a crossroads. If I continue, it will be a more selective and more solitary campaign. The prospect of an indefinite return to competition—next summer? 2022?—would be more daunting if my chosen sport was entirely hostile to aging bodies. But rowing has long featured a substantial cohort of outright codgers.

Happily, the number of women competing between ages 40-60 appears to be booming these days. They actually often outnumber the men in this age group and appear to represent the fastest growing sector of the sport.

This development is the legacy of Title IX-style promotion of women’s involvement in sport since the 1970s. Although a women’s crew first raced at Canadian Henley in 1947, “ladies” races did not become a permanent feature of the regatta until 1972.

I don’t think it is an accident that so many of my female rowing friends who came to rowing later in life did so after a serious engagement with another sport in high school or university.

A 2004 study by Brock University researchers based on a survey of Masters rowers attending Canadian Henley that year picked up an interesting difference between male and female Masters rowers.

94% of the women hadn’t rowed before their involvement in Masters rowing, whereas 92% of the men had started rowing earlier in life and continued on as Masters. It seems female Masters rowers often had more deliberately engaged with rowing:

“women in this study use Masters rowing more so than do men to handle stress and control the effects of aging” (Topell et al, 88).

In this light, the current suspension of racing has a different valence for older athletes than it does for the younger rowers.

Moreover, in Masters, the window for being competitive does not close as you age. Races are organized not just by boat classes and age categories—from AA (21-26) to M (89+)—but also feature age-based handicapping. The latter can give older competitors a hefty advantage.

I’ve been on both sides of that equation: bumped up to 2nd place when racing against 20 year olds, and edged out of the medals by ladies 15 years older (and 50m behind) despite crossing the line second.

Masters races in the highest age categories (75+) often have only one or two competitors. Many times I’ve joked with other late onset athletes that our competitive careers will peak once we reach 80 and attrition has thinned the numbers. But I suspect things are going to be quite different when my own age cohort reaches that stage.

(The World Masters Regatta was first held in 1973, as a test event).

The oldest competitor at the regatta in the video above, a 93 year old Swiss man, said, “I don’t want to be young. I want to be old. Being old is something wonderful – it’s absurd to think that being young is better than being old. I want to be 93 and at my best.”

A similar idea is described in the Toepell et al paper I cited above:

When describing “successful aging”, Novak (1995) refers to highly self- actualized older people who are engaged in the discovery of who they are becoming as they age, and not what they were or what has been in the past. Rather, as highly self-actualized people age they face challenges that aging presents leading them to further grow as they continue to age (Novak, 1995) and can lead them to select physical activities that promote their health.

I think there is something to learn from this mindset. There is no doubt, that in some ways, it is more difficult to race as you age. The recovery time needed between hard efforts grows exponentially with each year.

But sometimes it feels like the rowing world forgets that Masters (which now ludicrously extends downward to ages 21+ in Canada) is a *competitive* category, and not just shorthand for “old people rowing.”

The consistent plaint of Masters rowers is that nobody takes Masters seriously. This issue reflects serious problems internal to rowing culture, but also a more general cultural attitude toward aging and athletic competition.

Older athletes tend to be typed as broken-down warhorses delusionally cruising on the fumes of their former glory days or “I’m just happy to be here” back of the packers. Of course, both of these types exist. But there are plenty of serious amateur athletes out there who aren’t slowing down as they age. I know because I happily trained and competed alongside them.

After years of complaining that Masters rowing gets no respect, now seems like a good time to share what I have learned about these remarkable athletes.

In between my solitary jaunts on the Mississippi River between Appleton and Almonte, I hope to spend this Covid-19-inflected 2020 season profiling some of the wonderful Masters rowers I have come to know in my years in the sport.

I hope to start this series with the Masters rower that has inspired me most directly: the incomparable Kelly Brigley.

(Yes, that’s a Henley medal around her neck).

Kelly gently but insistently pushed me into my first race in a 1x. But her own story in rowing exemplifies the best and the worst of what Masters has to offer.